In the kitchen, Evaline is wearing a blue tank top, carrying a naked baby doll in one arm and a purse over her shoulder. She is in shorts, in February, because I am too tired to have that fight one-more-time.

As I hear her feet padding in circles, I know  she is spinning around the room. I can hear her voice. Soft now, she sings words that she thinks she understands from Disney movies and fairy tales. Love. Heart. Forever.

She drops everything from her arms, to hold her heart and she sings to the window, surrounded by broomsticks and things yet-to-be-swept, as though she is Cinderella herself. 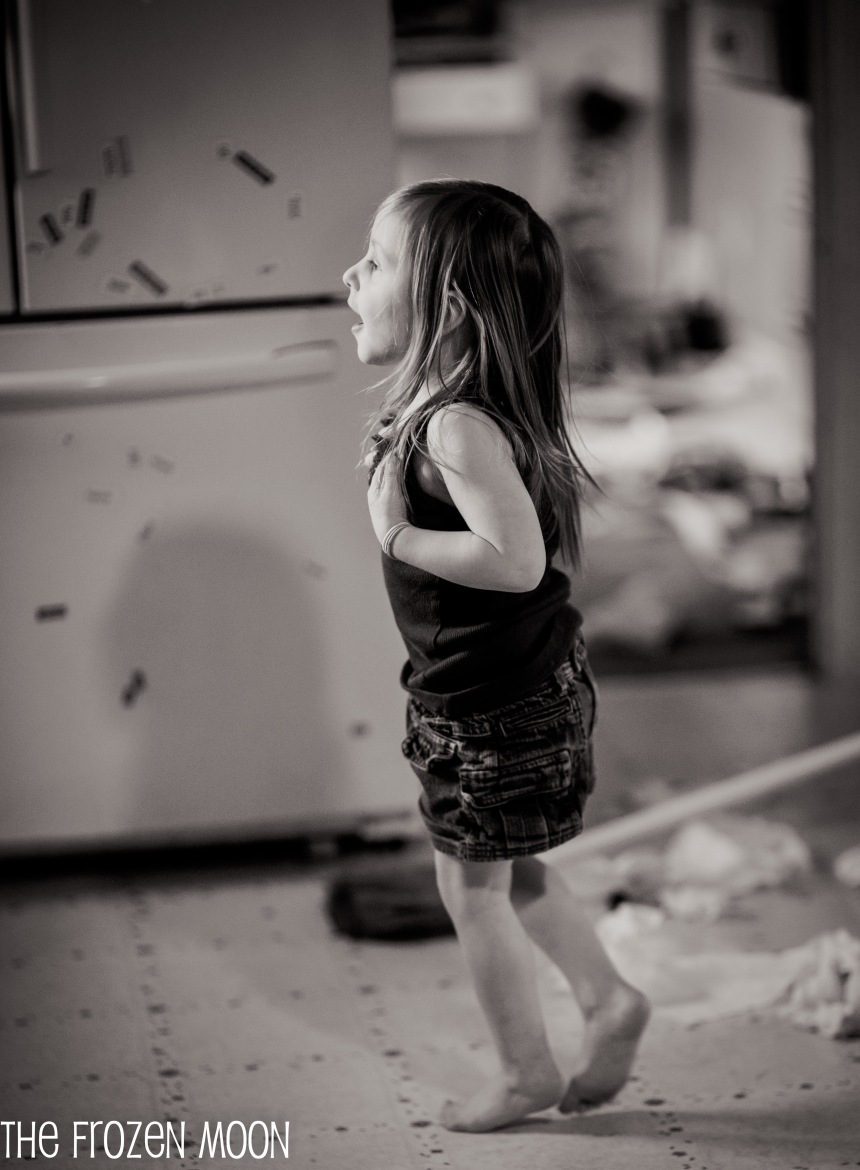 In my bedroom, I hear the finale. I’m a princess. My heart comes back with me. Ever.

Six hours earlier, her refrain was surprisingly similar and different, all at once.

(Translation by Lila, standing in the door frame, fully dressed and ready to go: Mama, she wants to do it herself.)

I would like for her to do it herself too, but I would also like to leave the house on time, or even remotely close to on-time too. Because being on time is polite, it’s respectful, it’s helpful. It’s just something you ought to try to do, even if it matters little to you, because it’s for the benefit of others.

Evaline threw herself to the ground, with her naked bottom up in the air, screeching something about how I all the time, ALWAYS make her wear pants.

And, so, we were ten (snotty, screeching, frustrating) minutes late.

Yet, if I’m honest, in another corner of my heart, where I still am the girl I’ve always been, the would-be rebellious daughter (who never actually did anything,) the girl who was grounded (often) and who can still feel the ping of her mother’s finger flicking her lips after talking back…I sort of admire her.

I mean, she’s wrong. Love isn’t a fairy tale. And Disney wouldn’t know where to begin to write about her wild heart. But, what she feels, she feels with everything she’s got.

Zombies, Princes, Dharma and Pink (as in the color, not the musical artist) – AWESOME.

Unfortunately for Evaline, she isn’t the daughter of an ever, every, all, always mom. She is my daughter. And I am undeniably, a sometimes, maybe, if there’s time, just because we did that once doesn’t mean we’re doing it every time mom.

And, I wish that I could tell her that forever and always weren’t only for storybooks and animated movies. I wish that I wasn’t old enough to know that forever, isn’t always forever (ever, ever, ever) and that love itself is often, even at it’s best, a complicated web of trust, sacrifice, happiness, friendship and hope.

In human hands, in human hearts, the concept is never quite so black and white.

I wish that I could explain to my daughter, there on the floor, demanding that I leave her naked-self alone to get dressed – that she is so wrong. I don’t always make her wear pants. I don’t try to help her every time. Sometimes, no, most times, I let her run around the house dressed as Snow White, shoeless and with maple syrup in her hair.

I wish that I could explain to her that, though she writhes in two-going-on-three  rebellion on my bedroom floor, in indignant agony that I offer my assistance (when she is, so obviously, capable of doing things herself) I still love her.

And that I know she still loves me, in her own, muddled and gray and not ever and always way.

You can (think that you) love someone and still be ever, always, for yourself.

But, love is sure a lot better, (though harder and slower and so much less about beauty and so much more about the mire) when you’re grown up and on the reality side of ever, every, all and always.

And life is easier when you can let loose the grip you have on ever, every, all, always. Because, life will prove itself, over and over again, to be less concrete and far more, sometimes, maybe, wait and see.

Even when you have to wear pants in February, in New Hampshire.