The words we speak become the house we live in. – Hafiz

I’ve been staring at the quote for twenty minutes now.

And I’m not sure where to begin. 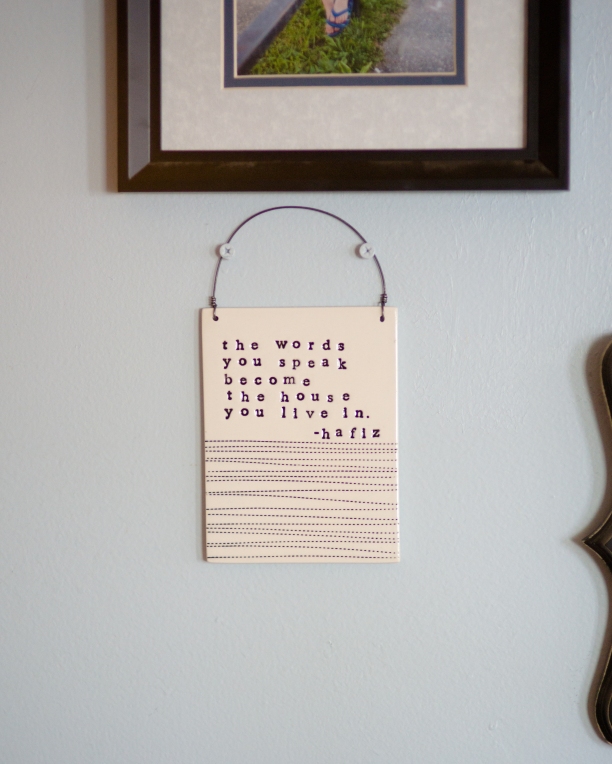 Both, physically and emotionally.

Ever since I put the plaque on my wall, I’ve found myself starting to imagine what it would look like to see my words, like a series Post-it Notes, covering a wall, creating a physical house. Quickly scribbled bits that have come from my lips, from my head, my heart, forever displayed.

The words I speak, when I’m hungry and tired and interrupted mid-conversation by a child with a need that I have to attend to, by a child in tears, by a child whining over something that I’m too burnt out to lend energy to understand and so, instead, I snip, bark, grumble and mutter.

The words I huff when my shivering nine-year-old, who is crying that I have forgotten to bring him a towel down at the lake, when he finds me in the kitchen, chatting with my mom (when I should have been tending to him.)

Stop crying. You’re okay. Instead of finding me, why didn’t you first get yourself a towel? You’re nine, you know where to find them.

There would be good things.

But, I know, there would be far too many petty ones, too many unnecessarily hurtful, not entirely truthful or flat out misrepresentations of how I feel about the people in my life. Because, why?

Because I have thoughtless moments, bored moments, exhausted, stressed-out moments when the overflow of my cup is less than beautiful. Because there are more times than I’d like to admit, when the words are ugly.

And, I’m coming to realize that if the words that we speak become the houses that we live in, I feel as though I’m building a house of junk closets that I would rather never be opened and it’s getting claustrophobic.

Oh, I just love them, they’re awesome, but I just can’t understand (insert annoying trait here) or He’s such a great guy,  but…

Truth is, as simple as it sounds, the words we speak about other people are more informative about who we are than anyone else.

He’s such a great guy, but… actually translates to: I can find your flaws and will at some point be so lacking anything else to say to another person that your flaws will become a topic of conversation.

It’s time to build a new house, with words that are uplifting and affirming, even when other’s aren’t there to hear their names being praised.

I know it’s human nature. I know that we all build our own houses and we all have our own closets and I ought not beat myself up too harshly, when there are plenty of words spoken about me too, I’m sure, floating out in the ether. Words, probably not meant to harm, probably just passing in and out of boredom, or momentary frustration. Words, not entirely considered, but entirely powerful.

And so, it’s nice to imagine a place where the houses are new, the walls bright and beautiful, the closets neat and useful, and not cluttered and shameful.

It’s nice to consider moving, starting over, building a better, more beautiful, me.