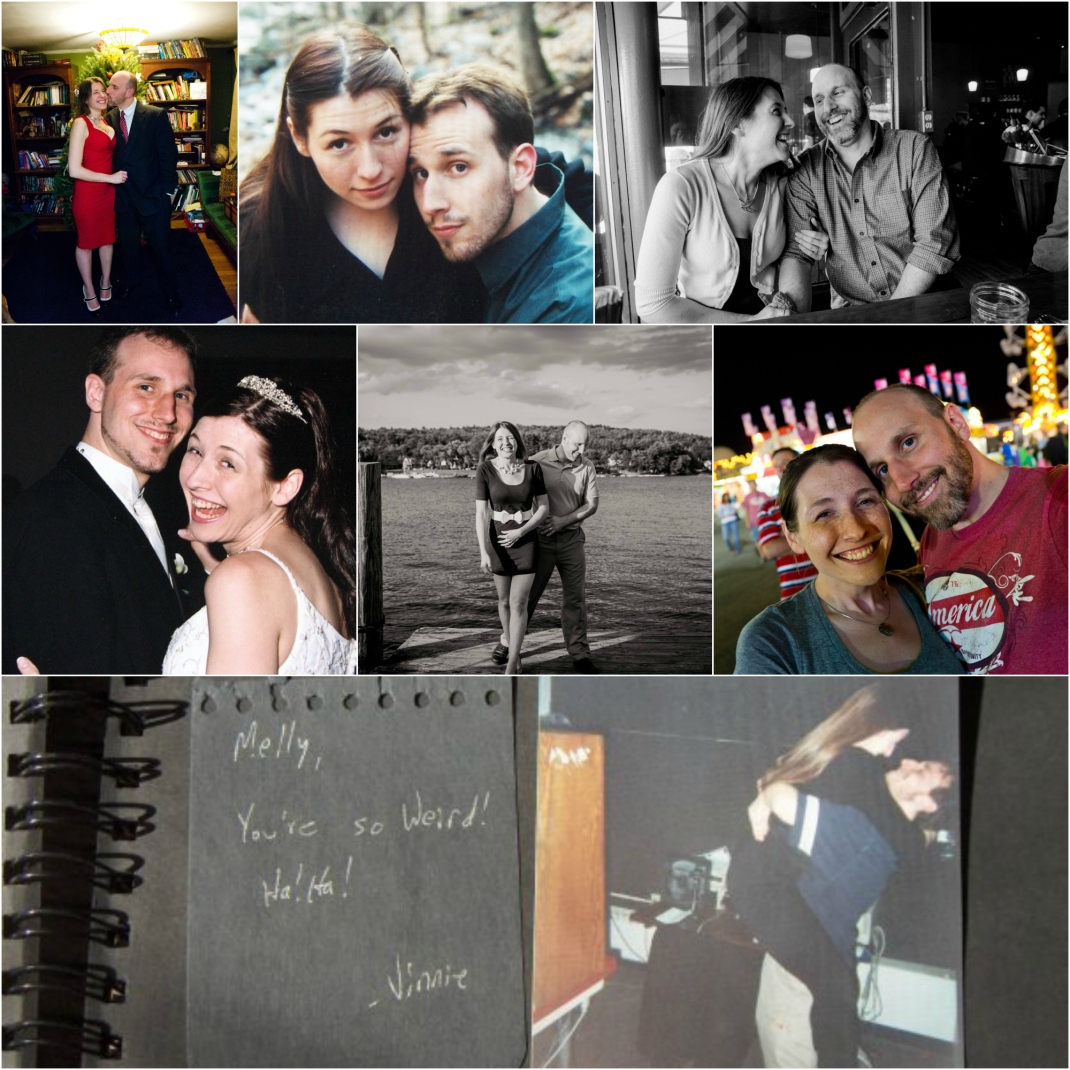 Because it’s been a bit of a tradition for me to sit down and reflect and write about our marriage each year on our anniversary, I’m here, at not quite seven in the morning, remembering that thirteen years ago, at this hour of thin yellowish sunlight and musical birds chittering and chattering, I was anxiously puttering around my mother’s house in a red plaid shirt, passing back and forth by a table of bagels and strawberries and sliced pineapple, but not able to bring myself to take a bite. My stomach was a tight fist of nervous energy and I was repeating the vows I’d written for Vinnie, over and over again, lips moving, not actually speaking, you’re my best friend, you’re my confidant.

Now, thirteen June 22nds later, that same truth remains, and all of the nervous energy of wondering and worrying over the great what if’s, has been replaced, as he’s proven himself, time and again, to be my best friend, my confidant.

And together, we’ve figured out at least a thing or two, maybe, about marriage. (Or, more specifically, our marriage.)

So does chewing too loudly, running in place during TV shows, eating things we shouldn’t (and then whining when in the subsequent discomfort), leaving dishes in the sink, throwing away or damaging each other’s prized articles of clothing, cranky mornings without coffee, driving too fast, getting places late, arguing over the correct way to pronounce words, tapping your foot in a way that shakes the entire table, gas, clipping toe nails and leaving one on the floor by accident, and so on and so forth.

We annoy each other.

When in doubt – Pizza.

Pizza matters. Delivery. Take-out. Make your own pizza. Super meaty. Vegetable. Buffalo chicken pizza. Pizza without any cheese, or with cheese taken from my slice and laid on top of his. Pizza is a love language. It’s simple and and unassuming. It’s comfort. It’s familiar, but can change, given your mood. And it’s nearly always something too big to be eaten alone.

In the very beginning of our dating, on our first night out together in a big group setting, Vinnie wanted to share a pizza with me, even though it meant ordering it without cheese. And he (whom I would come to find out, adores all things cheese) ate it, without much complaint.

When we were first married, we made big, fat-crusted pizzas, topped with turkey pepperonis and we ate them on the floor of our five-hundred square-foot apartment on a college campus.

When we moved an hour north, we made weekly date nights with our friends who would drive up to see us and to make pizzas with buffalo chicken.

Now, we have pizza nights with a whole houseful of children and friends, everyone gathering and talking loudly, laughing, sharing.

And, when in doubt for a place to go out to eat for a date, I have a favorite dine-in pizza place that I will choose over the fanciest of restaurants. White table cloths and $32 entrees have nothing on the comfort of sharing a simple evening of good pizza with my husband.

You can’t ever be certain you’re marrying the right person.

Marriage does not, cannot, magically freeze that feeling of love committed unto death-do-us-part, nor are we ever marrying the one and only right person we could ever have ever possibly married. Marriage is a commitment, it’s a contract, in it’s simplest form. It’s not a ceremony, it’s not a feeling, it’s not two hearts bound together to beat off into the sunset beneath a waving script of Happily Ever After.

At best, it’s two flawed people saying, I will face the rest of this life, with you.

(And, if you’re lucky, you’ve chosen a good partner. One who will listen to you when you feel like you’ve made a stupid mistake, or things aren’t going as you’d planned, and they’ll simply say, it’s okay, and hug you close.)

When they say through good times and bad, they’re actually serious.

I think part of me was naive enough to not fully understand what I was getting myself into, thirteen years ago in that garden. Of course life has good days and bad days, duh.

But, then, I had no idea what it would feel like to lose two pregnancies.

Then, I had no idea what it would feel like to be unable to make ends meet, with a newborn squirming in my arms as the diapers and bills piled high.

Then, I had no idea what it would feel like to be hurt, truly, by the man I was blissfully saying I do to, on that sunny, sunny morning.

And, I had no idea what it would feel like to be the one doing the hurting.

Conversely, I was naive enough to think that the love we shared on that morning was as good as it gets. (Ha!)

I had no idea how much I would need his hands to hold mine while we wept over those pregnancies.

I had no idea how much I would rely on his humor and grace, while we fumbled through from debt and job losses to finally being where we were able to stand again.

I had no idea how great love becomes when it has actually lived, when you’re still clinging to each other, after each storm.

And, I had no idea how wonderful it would feel to reconcile, to forgive and to be forgiven, over and over again, as we work through this everyday life we’ve committed to doing, together.