There was a day last week when I flipped out on my children in a way that can only be described as a toddler-in-Target like tantrum. It was the parental equivalent of kicking and screaming and making large, sweeping, unreasonable, demands to an audience that had no intention of giving-in.

I felt a blood vessel (or two) burst, as my teeth rattled. There may have been foam coming from the corners of my lips, as the children all scurried around the house, heads down, shoulders scrunched to their necks, hurriedly, anxiously, as though in fear of bombs falling from the sky.

In more than a decade of parenting, I know I’ve had days like last week, before.

I know that there have been moments when I’ve terrified, even myself, with how much rage can come out in one guttural scream of – how on Earth can it possibly take SO long to put on your shoes???  How can you not have even FOUND your shoes? We’re LATE!

And I know that, as a family, we have been busy to the point of exhaustion. Two birthdays, a mini-session day, Easter weekend, a fun-but-exhausting weekend away, adjusting to Vinnie starting a new job (and not being home to help with school and/or sanity). It’s been a hectic month. There are reasons behind the flip out – just as there are almost always deeper reasons behind the moments when my children lose their cool.

On Monday night, I laid awake at two in the morning, thinking – this is not the childhood I want for my children – to have a Dr. Jekyl/Mr. Hyde mother, to jump from their seats when I walk into the house and their chores haven’t been done, to be reduced to tears by the enraged, cheek-wobbling, guttural yells coming from my lips…over Easter grass and piles of clothing and books strewn on their bedroom floor.

This isn’t the motherhood I want for myself.

For the first time in recent history, I fell asleep, mid-prayer.

I stood in the kitchen the next morning, looking out over the tiniest of buds, finally sprouting on the big tree outside our window. Alex was outside with Dharma, the other kids were already settled into their seats, laps covered with school books. Sunlight streamed down over the sink, full of watery-milk filled cereal bowls.

Barefoot, watching dust motes in the streaming sunlight, I listened to the quiet of our home, to the peace of a day that was just pulling back the covers and beginning. Hopeful. New. A sunny, cloudless morning. A blue sky after a week of April showers.

And then, I took down a mason jar that has been sitting up on our highest shelf since we first moved in – never used. I cut some plain white paper into squares. I fished through a kitchen drawer of junk, for an unbroken, sharpened pencil.

At the dining table, I placed it down and announced to the children, this is our yelling jar. Like it was a real, honest-to-goodness thing, and not the concoction of a tired mother (who knows that she needs it more for herself than for anyone else).

If you find yourself yelling at someone out of an inability to control your temper, or for any reason other than trying to protect them from harm (if they’re about to walk off a cliff or be hit by a bus, for example), you need to stop, come take a piece of paper and write something that you like about the person you were yelling at and put it in this jar.

We’re doing this for a week. Even (especially) me.

I dropped the pencil down into the jar and walked away.

That was three days ago, and I have only had to ask one child to write, one time.

I was so pleasantly surprised by the shift, even in my own heart, that as I passed by the jar this morning, I was intrigued to find that it had any papers in it at all. Arguments, shouting matches, that had been diffused without ever even reaching my ears. 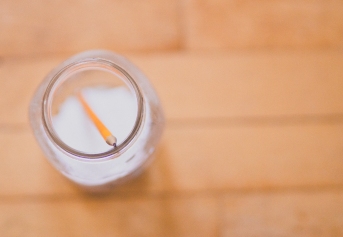 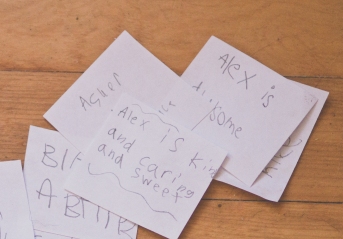 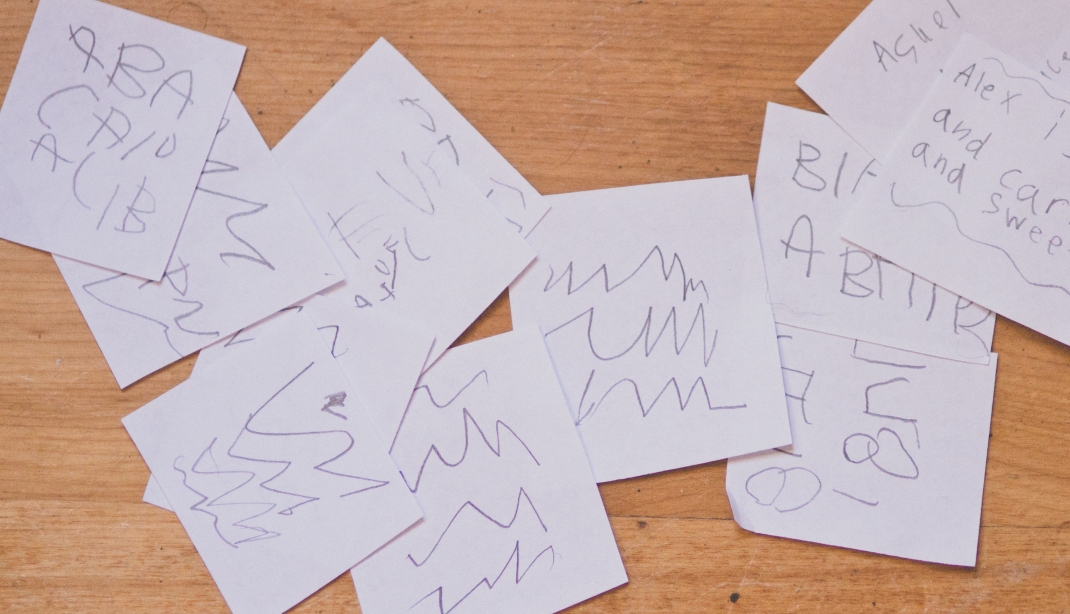 She did as she was told and scribbled her frustrations down into good thoughts and jumbles of letters. Anger diffused into artwork of mountains and waves and messy figure 8s. A language of compliments and kind words that no one will ever understand, but her.

She has been more peaceful.

Our house has been quieter. My heart has been more still.

I’m not crediting a mason jar, or a pile of unevenly cut slips of paper, or a #2 pencil.

I’m not crediting my early morning inspiration to replace shouting matches with a jar with compliments.

I don’t even know how long the jar will last.

But, if we can all continue to see each other, even through our frustrations, to really see one another as individuals, as people, as loved ones and not sounding boards for our anger…I’ll consider that a pretty big win.

And one step closer to daily living out the motherhood that I want.