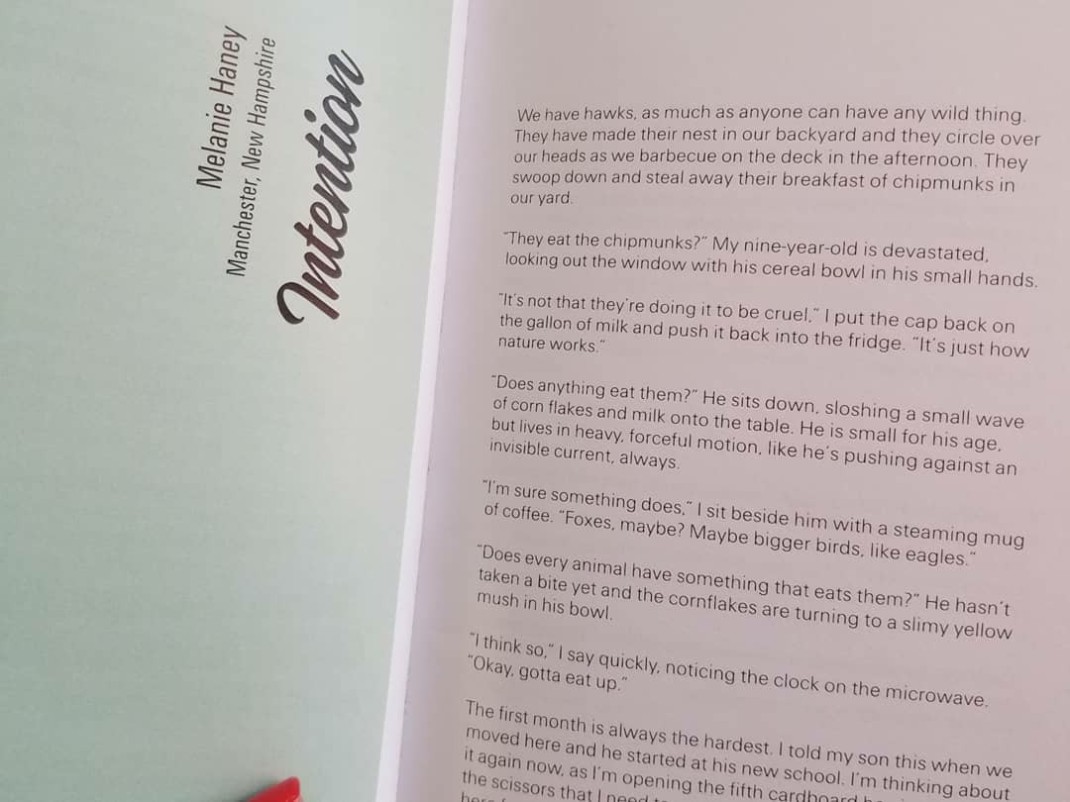 (In April, I committed to writing a new collection of short stories and to start submitting the works out into the world. The following was recently named a finalist and published in the Hemingway Shorts 2018.)

We have hawks, as much as anyone can have any wild thing.

They have made their nest in our backyard and they circle over our heads as we barbecue on the deck in the afternoon. They swoop down and steal away their breakfast of chipmunks in our yard.

“They eat the chipmunks?” My nine year old is devastated, looking out the window with his cereal bowl in his small hands.

“It’s not that they’re doing it to be cruel,” I put the cap back on the gallon of milk and push it back into the fridge. “It’s just how nature works.”

“Does anything eat them?” He sits down, sloshing a small wave of corn flakes and milk onto table. He small for his age, but lives in heavy, forceful motion, like he’s pushing against an invisible current, always.

“I’m sure something does,” I sit beside him with a steaming mug of coffee. “Foxes, maybe? Maybe bigger birds, like eagles.”

“Does every animal have something that eats them?” He hasn’t taken a bite yet and the cornflakes are turning to a slimy yellow mush in his bowl.

“I think so,” I say quickly, noticing the clock on the microwave. “Okay, gotta eat up.”

The first month is always the hardest. I told my son this when we moved here and he started at his new school. I’m thinking about it again now, as I’m opening the fifth cardboard box in search of the scissors that I need to cut my daughter’s hair. We’ve been here for two weeks and I can’t wait to have everything settled, to have scissors and nail polish remover and dental floss all in their respective places. To have these boxes emptied, folded down and put out with the recycling.

When the phone rings, I’m on my knees.

It’s on the kitchen counter and by the time I get there, it’s silent.

Celia, my daughter, is asleep on the couch. She is three and has a wad of pink bubble gum in her fine auburn hair. I told her to sit still while I looked for the scissors. It was only fifteen minutes ago, but when you’re three, waiting is endless and infinite.

The phone rings again, this time, it jumps to life in the palm of my hand. Celia stirs, subconsciously lifting a hand to the sticky knot in her tresses.

“I’m calling from Northbridge Elementary. I’m here with your son, Sam. We’re going to need you to come in.”

“Is everything okay?” Of course, everything isn’t okay. School offices don’t ever call on Thursday mornings to say, come on in and see how okay everything is.

This is the fallout, I think, my fingers desperately pulling at the sticky pink clot in Celia’s hair. She’s crying. I’m crying. The gum is remains. We need to get to her brother.

He pinched the girl, on the back of her bicep. Hard enough to leave a purple mark and little white crescent moons where the curves of his fingernails dug in.

There is always a fallout.

I remember that it was raining the day I decided to leave. Heavy, fat drops of water. filling the flower pots on the porch steps. Too much water can drown a flower, I remember thinking, watching from the screen door, holding my wrist in my hand, feeling the tenderness of my own skin.

I thought of my stream of I’m sorries. I’m sorry I made you mad. I’m sorry I wasn’t fast enough, slow enough, out-of-your-way-enough. The water I flooded our lives with, trying to stay afloat.

Water will drown things. It will stain things, harden things, bloat, warp or ruin things – but the things still exist.

Fire, on the other hand, burns things into embers and ashes until there isn’t anything left to be built back up. You have to start over.

And so, I packed three suitcases with a sprained wrist and a wring of bruises. I chose to light my life on fire. I chose to not let us exist.

The hawks are circling overhead as we pull out of the driveway. Celia points to the sky and tells me she loves it when they dance.

“They’re not dancing,” I sigh, glancing back at her in the rearview mirror. “They’re hunting.”

“Hunting what?” she scrunches her face into a soft ball of pink cheeks and green eyes.

“Whatever they can find.”

This town is smaller than the last. It’s five square miles, maybe. I’ve already seen the same faces more than once, at the CVS on Main Street. I can feel that I, we, stand out as different. Not that we’re different looking, only that they’re not used to seeing our faces in their shops, at the counters of their restaurants, in their school. It’s the feeling of walking into a party that you only read about on a flyer tacked to a bulletin board, but no one actually invited you. It’s the feeling of taking up space that isn’t yours to own.

The office is busy with four desks of admins and secretaries typing and filing and calling other children’s parents to disturb their quiet Thursday mornings, I imagine. Everyone steals glances as we wait. Celia with her gum-hair, and I.

Sam is sitting with his head looking down the entire time the principal talks. He doesn’t fidget or move, just stares at the linoleum as though it has the power to make him invisible. The girl beside him is tall and pale with orange freckles that spread from her forehead to her cheeks to the tops of her ears. Her eyes and nose look ruddy, as though she has been crying, but she does not look down.

“I didn’t mean to,” is the only thing that he mutters, before we’re dismissed and I’m taking him home with me.

Fenton isn’t my given name. Not mine, not the kids. It’s the name I chose from a list of surnames when we needed to disappear, when I feared that he would come searching for me, for the children, when I feared his spite would never let us go.

I overestimated my husband. He hasn’t bothered to look. Or, he’s simply given up in the wake of our moves, to new towns. New schools.

This is our third new beginning and I am ready to actually begin.

We sit in the car in silence for a minute, the steering wheel in my hands, Sam looking downward at his hands, crossed on his lap.

“It’s not enough to not mean to,” I finally say, starting the engine so we can make the drive down these new roads to the house with the boxes that never end. “You have to mean not to.”

When we pass down Main Street, I pull over at the pharmacy and buy new scissors.